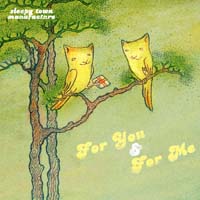 In the form of a Valentine's Day gift to all from Russian idm maestro Sleepy Town Manufacture, which Monotonik has sneakily re-packaged and re-gifted to the entire world, we're proud to present 'For You & For Me', an entire double album picking some of the best from STM's unreleased output from 1999 to 2002, with a number of tracks specially updated and remastered for this compilation.

Sleepy Town, formerly a duo/trio, and now down to a single member, are particularly known for their association with Lee 'Metamatics' Norris, having released a track both on his NeoOuija's 'Cottage Industries 3' compilation and on the excellent Metamatics 'Rewired In My Manor' remix CD on Hydrogen Dukebox. They've also released several times on Monotonik, most recently the borderline gorgeous 'Latatoo EP' in late 2002.

So, it's a pleasure to be putting out such a glacially dreamy double album for free - there's so much great material on here that it's difficult to pick out highlights, but let's start with 'Lea Chind', all ethereal synths and looping melodies and soaring into the future, before picking up on the ultra-dense 'Noil' and its rolling waves of sound, before moving on to the almost mechanical, tragically catchy 'Polygon', and the closing drift of the truly serene 'Ambient Forms N4'. All in all, a wonderful experience, and a beautiful thing to just give away just like that - for that, we thank Sleepy Town and their beguiling ways.

[Thanks to Rinnli for drawing the wonderful cover-pic, and Names for coloring it.]

Album
For You & For Me

This is some of my favorite netlabel music- and the sort of thing you can recommend to people new to the Creative Commons world- Actually a great starting point into the IDM world, too!

Fantastic from start to finish- I've been listening to this on and off for several years now and still find new perspectives in the songs- lately it's the industrial edge that stands out to me-- an unspeakable beauty mingled with a surging darkness...

You will surely love this incredible double cd of Russian-born electronica- now go listen to it before another minute of your life passes by...